I don’t know if you are keeping my letters, but they might be an interesting reminder later on" 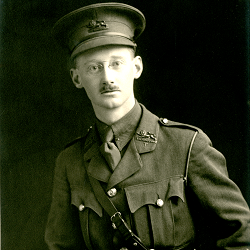 John Welch (1884-1966) was a Lancaster solicitor who joined the Officer Training Corps in January 1915 and was commissioned as 2nd Lieutenant 4th (T.) Battalion King’s Own Royal Lancaster Regiment on 13th June 1915 and promoted to captain in July 1917. He served in France from January to August 1916 and was wounded during the Battle of the Somme on 8th August 1916. He returned to France from May 1917 to April 1919. After the war, he returned to being a solicitor but retired early to pursue his community interests and became a county councillor.

During the First World War, John Welch corresponded regularly with members of his family. These letters cover the period from his training in Britain in 1915, to serving in France and until after the war in 1919.

The letters were transcribed with faithfulness to the style of the original by Catharine Margaret Welch, John Welch’s granddaughter, and the daughter of his son Dr John Philip Lane Welch and the latter’s wife, Annie Hogg Young.

The John Welch letters offer a powerful personal narrative into the daily life of an officer both at the front and behind the lines. The collection is remarkable in that it includes correspondence for the duration of the war and so provides an insight into John Welch’s participation throughout the entire conflict. The letters do not contain detailed descriptions of military operations or offensives, although they do provide snapshot pictures of the duties of an officer: censoring letters and organising the Mess, leading working parties on signalling duties in no man’s land under cover of darkness, reconnaissance work and trench duty. John Welch has a strong descriptive style, and pictures of the front are clearly and simply drawn “reconnoitring in the afternoon … we saw a marvellous sight, an English aeroplane scouting over German lines … Then we crossed the barrier into no man’s land, past sentries to a land of empty houses, of demolished barns, of stones, work of trenches, of small ponds made by shells.”

The letters give a vivid insight into life in the trenches, of days spent “drudging through the trenches for hours on end through slush and slime at places up to one's knees with mud caking to your coat” and the conditions faced by soldiers at the front, “We had 4 days in the front line with 2 dug outs for the Battalion. We hadn't even our packs with us so that we got neither wash nor shave and meals cooked in a shell hole were not very elaborate however some of my emergency rations came in useful”. Time for letter writing is short, John writes “I have no time for letter writing … I am writing this in our front-line trench whilst whiz bangs are going over”.

Striking descriptions of the weather occur frequently in the letters, in the trenches “[it was] pouring down … [the trenches] were leaking and getting soppy with water … the trench was ankle deep in water and … fearfully muddy”, and marching to headquarters, “When we left at 6.30 this morning it was still freezing hard and all the branches of trees were laden with white [rag] and soon our coats and moustaches and eyebrows were equally White and the wind was cruel”. These descriptions are thrown into sharp relief by their juxtaposition with John’s comments on ordinary daily life: meals, daily frustrations and pleasures, social life and personal relationships, which are interspersed throughout the letters.

The collection of letters offers a compelling, personal impression of life at the front in the First World War. Conversational in tone, the letters bring to life the experience of an officer in the British Army during one of the defining conflicts of modern history.

The digitised collection makes available over 300 letters and other items such as field postcards, photographs, menu cards and other ephemera. The letters were loaned to Lancaster University Library by the Welch family for the purpose of digitisation.

The original letters and ephemera are preserved in envelopes, grouped by theme, date or recipient. However, the digitised letters and corresponding transcriptions have been arranged chronologically for the Lancaster Digital Collections platform to allow the personal narrative of John Welch’s story to unfold with the course of the war.