... masters in the ancient arts and craft of glass painting ..." 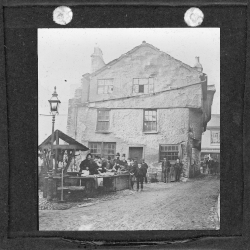 The collection is comprised mainly of photographic lantern slides, although there are some glass negatives. The format connects the entire collection as there are a range of subjects, photographers, sizes, and locations. The University has held the collection since the 1970s, with the collection originally donated by Burnley Technical College. It has been added to over the years from a variety of sources, with the slides rescued from destruction and rehomed in a safe and secure environment.

A large proportion of Shrigley and Hunt's work was designing and producing church windows, and this is reflected by the collection, with Shrigley and Hunt windows found in Lancashire, the north-west of England, throughout Britain and the world. Lancashire Archives holds the archive of Shrigley and Hunt. This includes financial documentation, such as cost books, order books, cash books and wages books. Alongside this are documents related to the output of the firm, such as design registers, materials books, drawings, and architect records. There is a Shrigley and Hunt stained glass window on the first-floor landing of Lancaster City Museum, which states the firm were masters in the ancient arts and craft of glass painting.

Lantern slides were commercially manufactured, such as by Kodak. Sets of lantern slides could be bought, with a pre-existing image on or individuals could buy blank plates and produce their own photographic lantern slide. Lantern slides were used for diverse and ranging purposes. This included entertainment, education and, as in the case of this collection, photography. Lantern slides were projected by a magic lantern, a forerunner to digital projectors. A source of light - initially a candle, then limelight and finally a bulb - illuminated the images of the slide onto a surface.

Lantern slides are a transparent positive image contained within a gelatin emulsion. It is enclosed by two glass plates and taped shut. Lantern slides are mostly black and white, especially those from 1850-1950. A negative is produced when an image is taken by a camera. The negative is then in contact with a gelatin binding, coated with light-sensitive silver salts and this produces a positive image. Glass slides after 1890 used gelatin silver paper. Gelatin became popular for photography as it was more stable, didn't yellow and was simpler to produce than its albumen predecessor. Negative lantern slides are made when the image is left unprocessed. Colour was sometimes added to the glass lantern slide. This either involved painting the glass or hand-painting negatives with minute paintbrushes using oil paint, dye, or water-colours.

The nature of glass and emulsion means lantern slides are at risk from deterioration and breakage and this affects the storage of these materials.