Cinema Memory and the Digital Archive

Cinema was a real thrill in those days. Mhm. Yeah. Talking about it I can almost feel how I felt." 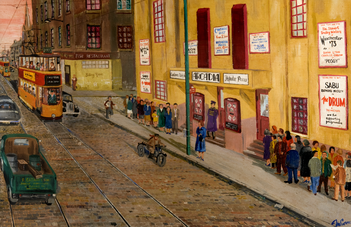 The starting point for the ‘Cinema Memory and the Digital Archive’ (CMDA) collection is the material gathered in connection with ‘Cinema Culture in 1930s Britain’ (CCINTB), a pioneering ethnohistorical project into the cinemagoing and cinema culture of the interwar years. In the course of the nationwide CCINTB inquiry, conducted during the 1990s and early 2000s, volunteers were asked about their experiences and memories of going to the cinema in the 1930s. In the process, CCINTB collated over a hundred audio-recorded interviews, over two hundred participant files with a multitude of related correspondence including letters, over three hundred questionnaires, and researchers’ field notes, as well as other documents and a diverse collection of donated memorabilia. The physical collection of this material is held within the Special Collections area of Lancaster University Library and, thanks to the AHRC-funded ‘Cinema Memory and the Digital Archive’ project, the material is now in the process of being accessioned, catalogued, and digitised.

CMDA’s initial release for the Lancaster Digital Collections showcases a collection of ‘Picturegoer Postcards’, which were donated to CCINTB by the original owner, Denis Houlston.

In response to a call in the Manchester Evening News for volunteers to take part in the project, Mr Houlston wrote a letter expressing his avid interest in cinemagoing during the 1930s and explains how he became a member of the ‘Picturegoer Postcard Club’: “I think when I was 9 or 10 and in bed ill a family friend unwittingly gave my mother a large pile of 'Picturegoers' to interest me. I was hooked and on return to fanatically-football health bought it every week. I joined the 'Picturegoer Postcard Club' and amassed a collection of glossy sepia postcards 6”x4” of my idols.”

Fan magazines like the Picturegoer had a huge following during the 1930s, as they gave cinema audiences exclusive insights into the glitz and glamour of Hollywood and their favourite stars and films. The Picturegoer was one of Britain’s most popular weekly magazines and by becoming a member of the ‘Picturegoer Postcard Club’, film fans like Mr Houlston were able to collect pictures of popular film stars. The postcard series featured top stars of the day, including Laurel and Hardy, Madeleine Carroll, Clark Gable, Gracie Fields, Rin Tin Tin, and many more. Emblematic of the changes occurring to the promotion of films during this time, a small number of the cards in our collection have been hand-coloured, a process that was carried out by the manufacturer rather than the donor.

Mr Houlston became one of the core participants for CCINTB, and during his interview in April 1995, he explained a little more about the process of ordering the postcards: “… for threepence each you could get a sepia photograph of your favourite star, so there’s a list, you sent off for them. But if you ordered twelve you could get them for two and six, which is what, twelve and a half pence now, each. So I totalled that, twelve and a half for twelve! A penny each instead of threepence … So I had a collection oh, I collected these avidly.”

Mr Houlston donated his fantastic collection of 162 postcards to CCINTB, along with other items he had collected and cherished. What was once an adolescent pastime for Mr Houlston has become a valuable research resource, and we are delighted to be able to preserve and share it with others.

The key publication relating to material from the collection is Professor Annette Kuhn’s An Everyday Magic: Cinema and Cultural Memory (I.B. Tauris, 2002).

The CMDA collection is also featured on a project website.